Suggested Dissonance is an invitation to an artistic research process by sharing cross-sectional narratives to questions and encounters. This path will take us through the forest, the relational, the interdisciplinary, the sense of belonging, the notion of place, exchange and dialogue between different kinds of knowledge which are intertwined concepts in a space in between. This collective ritual offers the opportunity for participants to become active agents in this shared multisensory experience.

This event is part of the project "Colombia BioResilience: Biodiversity resilience and ecosystem services in post-conflict socio-ecological systems in Colombia", an interdisciplinary collaboration between the University of Bristol and University of Exeter (United Kingdom), which has given the opportunity to the artist Seila Fernández Arconada to generate this research during her placement at the Alexander von Humboldt Biological Resources Research Institute (Colombia).
​ 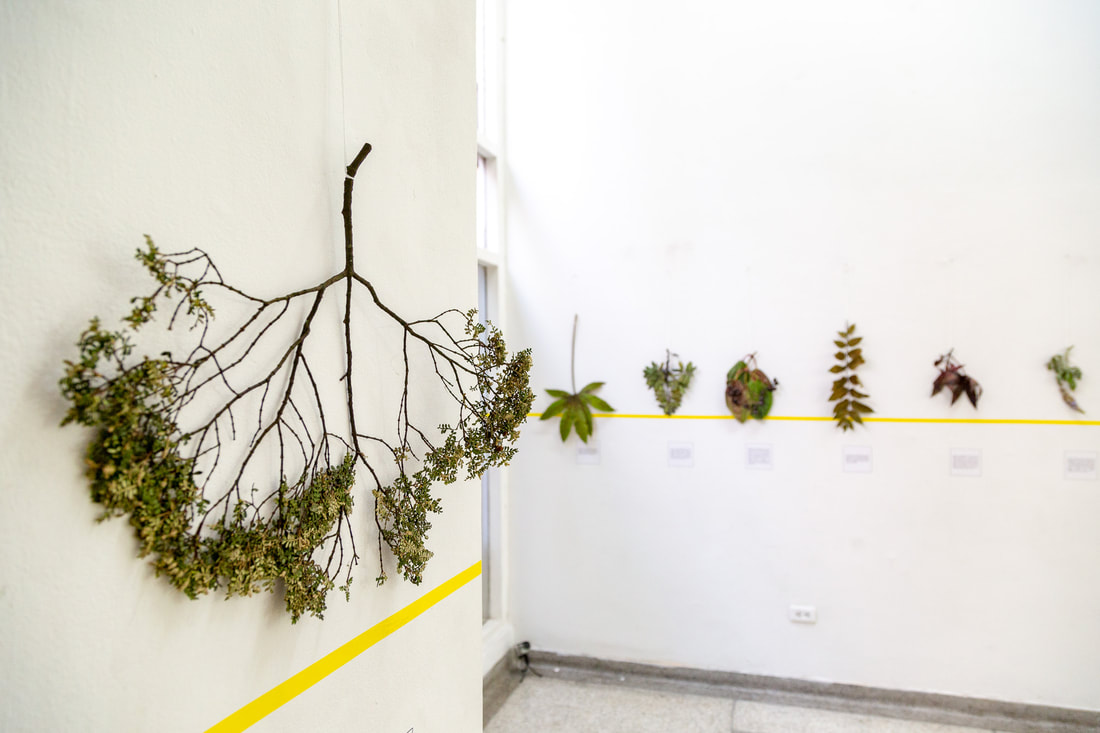 Disonancia Sugerida, experimento artístico en el espacio intermedio took place on the 25th of July 2019 at El Parche Artist Residency. The participants were kindly asked for a prompt arrival as the event could only begin will all present. Each participant arrived at the entrance having to call a number in order to access the space. The residential  building camouflage this place, therefore a poster guided their arrival. Juan, one of the organisers from El Parche, opened the door to the two floors of stairs taken to arrive in the space. Meanwhile Seila was offering an infusion to those already arrived. This infusion was one of the works at the space, a “limoncillo” herb coming from Guasca, kindly brought by one of the collaborators at the field work there. This tea was offered with the information about how Cristela brought this tea to Bogotá, suggesting there was already a “bond” with this location and person by drinking it.
In the space of what could be seen at first sight next to the entrance was the information and the acknowledgements of all who contributed to this event. There were also a number of plants hanging on the wall, distributed all along taking over the white wall space. These plants were crossed by a long yellow line displayed at 1.30m. This line defined the space, making visible the invisible, the delimitation and enclosement, representing  the idea of “parcela permanente,” which is defined in the soundscape. The plants were hanging with a white string from a stitch. Each plant had a description of its attributes, following a museum protocol by locating a label next to each plant. However, these plants don’t have a name, only descriptions.
The soundscape was played, beginning with a number of sounds and the guiding narrative. This narrative aimed to bring participants somewhere else, a space in between were other narratives were intertwined between all present and the space.

This collective ritual was an embodied experience where participants were asked to become plants, plants that were displayed at the walls of the space. When the moment of  making the choice arrived, each had to take a plant. From then the space became a parcela permanente where multispecies relationship became the most important. This experience was the trigger of the  following discussion. 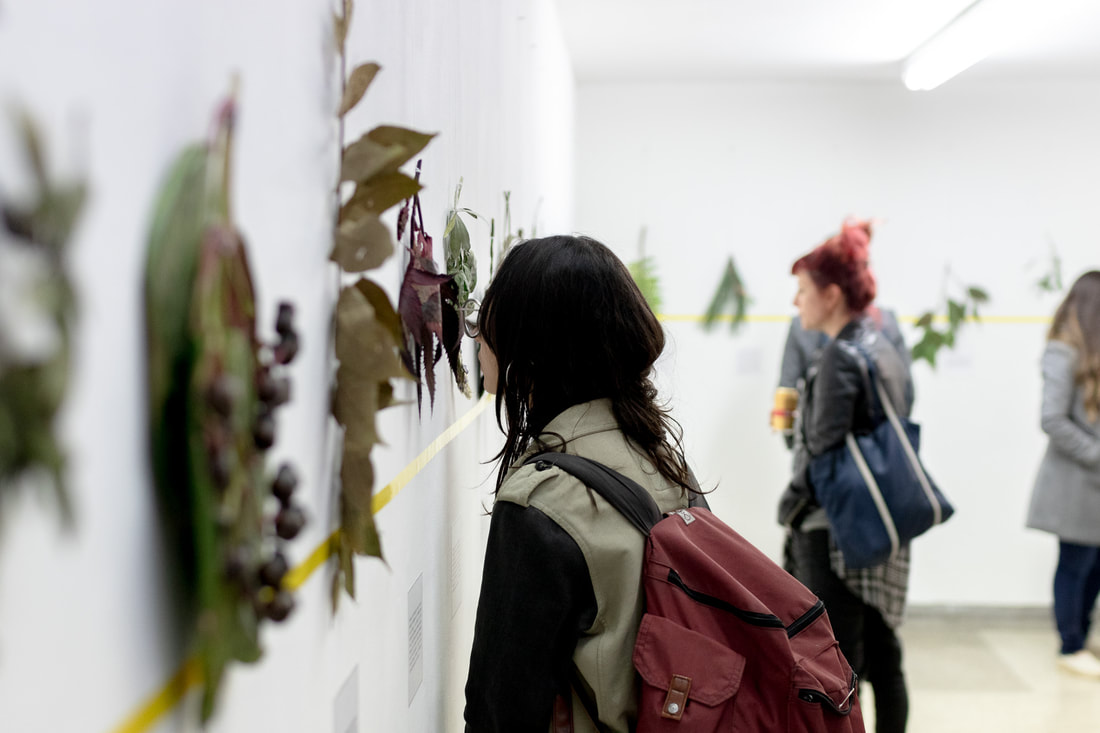 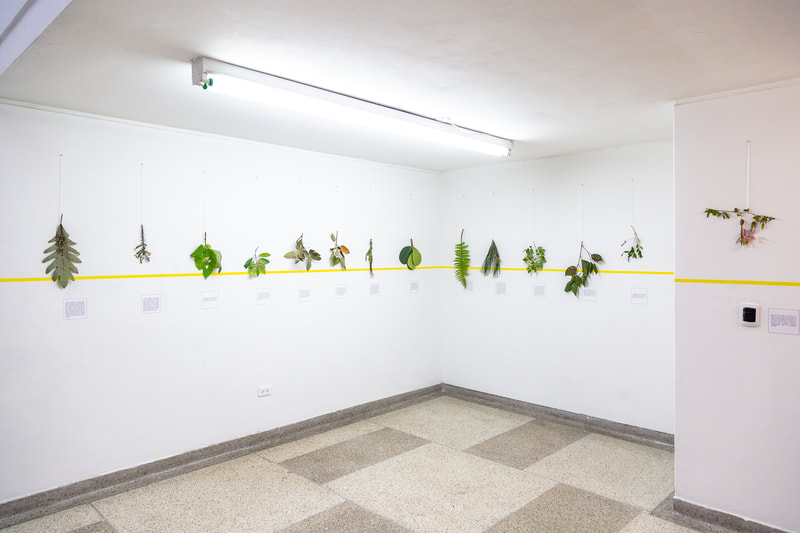 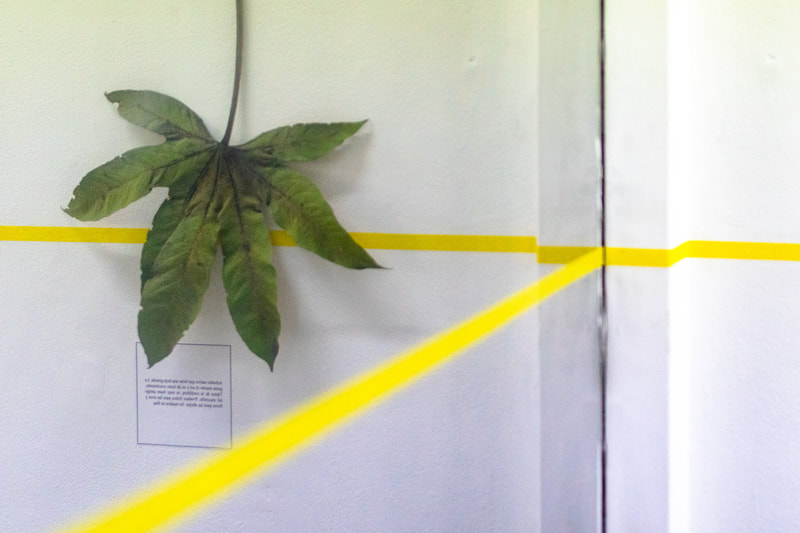 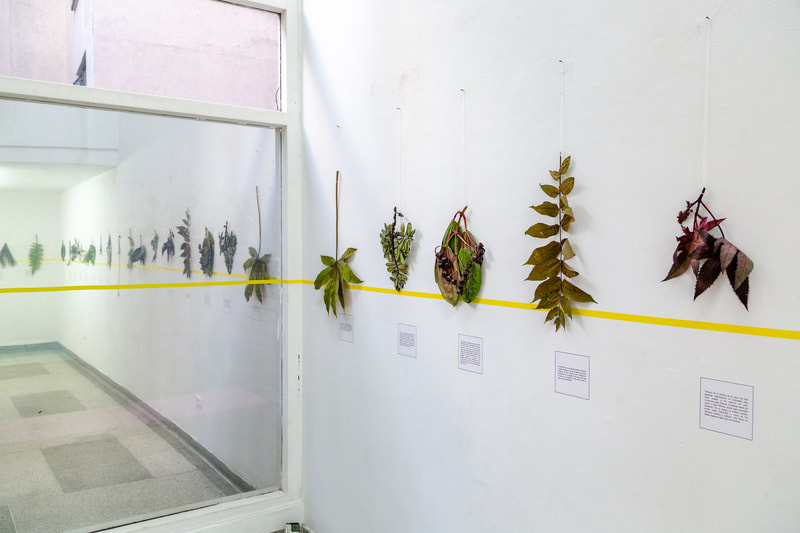 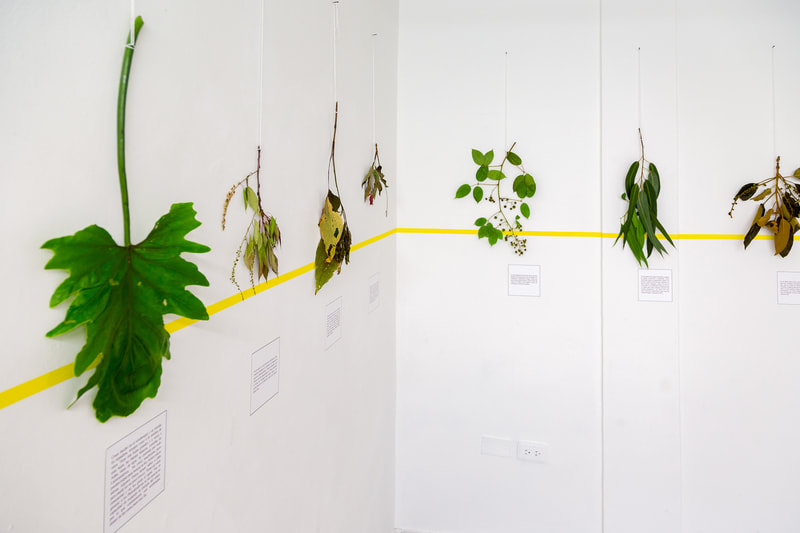 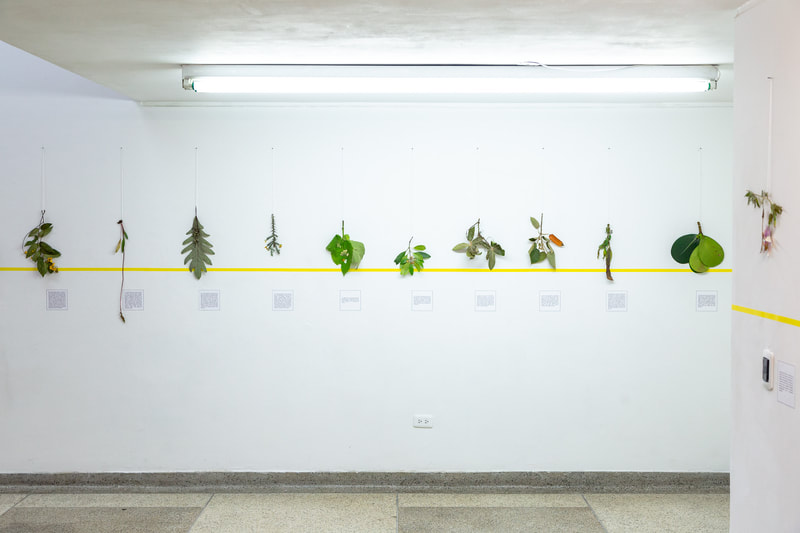 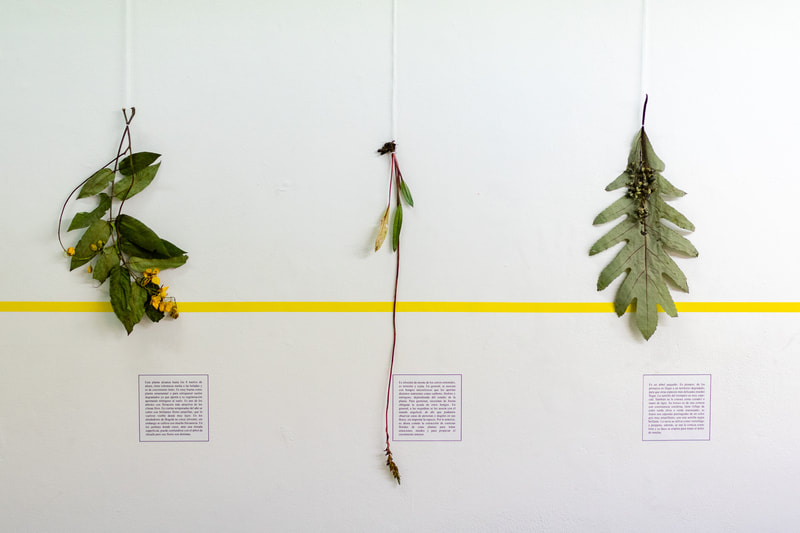 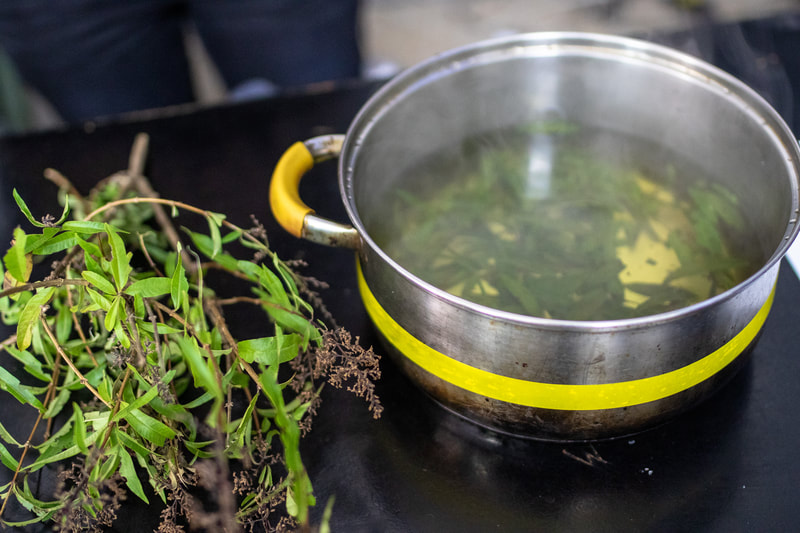 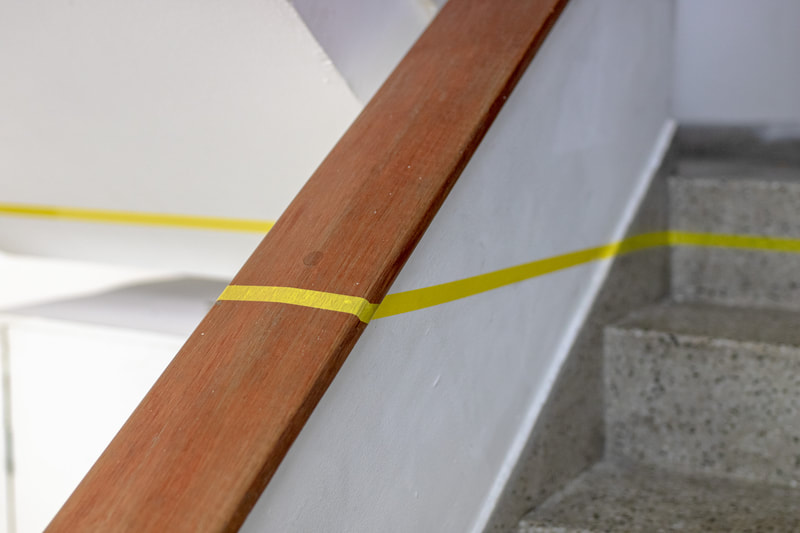 This event was a response to encounters that took place during the research, questions taken to be developed into practice aiming to generate transversal dialogues throughout a created situation. For it, the process was driven carefully from conceptualisation, intentions and the selected participants, 40 in total.  This event, however, was an artistic experiment included in the series of events generated during the placement and not a final event where all encounters and questions were presented. The main aim for this event was to generate more questions to continue researching further.

Suggested Dissonance is a term I created to subvert the idea of “consonancia sugerida.*”this term, used in music, relates to the number of processes a composer can take in order to make dissonant sounds sound less unpleasant to the ear, following parameters of “harmony” in terms of classical music canons. Thinking of the project’s aims and the problematics and needs of the current socio ecological “crisis,” dissonance becomes even more relevant: it is not only a term that can relate to music but a term that can generate new forms of engagement by creating spaces in between. This association grew from the number of definitions and interpretations of the term resilience, which has been a central core of this project so far. It is also a term very present in contemporary times that sometimes I find problematic. For me, the concept of resilience means process, a process of adaptation which isn’t smooth or fluid but which relates to an ongoing series of events and the ability to adjust to the changes or shifts generated. This process is practice, a practice that faces the unknown to which I relate from the art practice I undertake.

Those dissonances are therefore like changes or shifts in societal behavior patterns (if we focus on the social) or even the way all species adjust to changes in their ecosystems. They can be easily, badly or very badly perceived with more or less implications to further adjustment. In addition, there is a need for transversal terms, relations, questions and methods; there is a need to find other ways of “talking to each other”. This event therefore aims to put into practice such questions in an experimental manner where the public becomes active participants of this collective dissonance.

For this event I generated dialogues with other disciplines such as ecology, botanics and anthropology. These close dialogues have been growing through conversations and shared encounters with local professionals and members of communities in Guasca, including: some of the members of the project Bioresilience, especially with Julieth Serrano; members of Instituto Humboldt, in particular with Klaudia Cárdenas, Germán Torres, Sandra Medina, Ana Maria Garrido y Alejandro Hernández; and furthermore with el Colegio San Bartolomé and El Parche Artist Residency,  who were included in the acknowledgements of a poster at the entrance of El Parche. 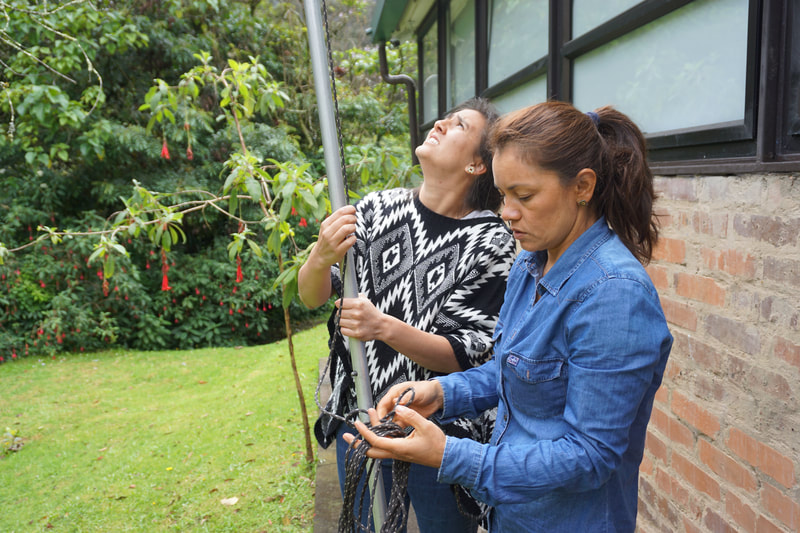 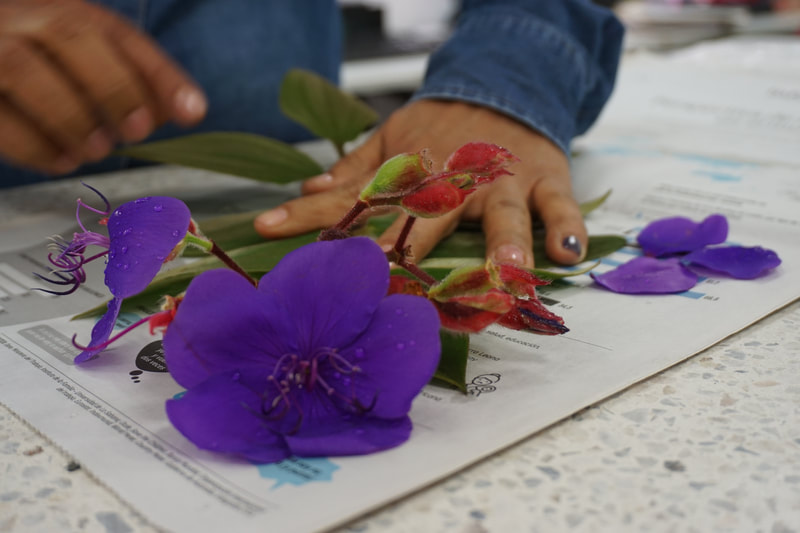 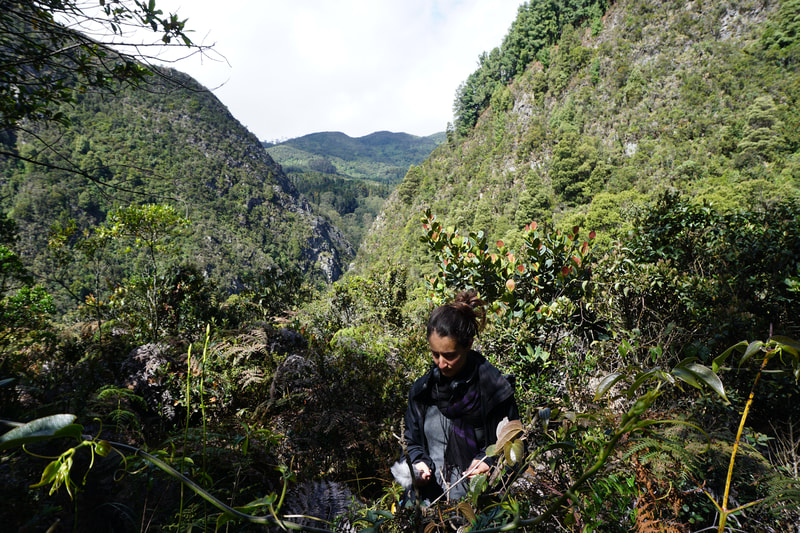 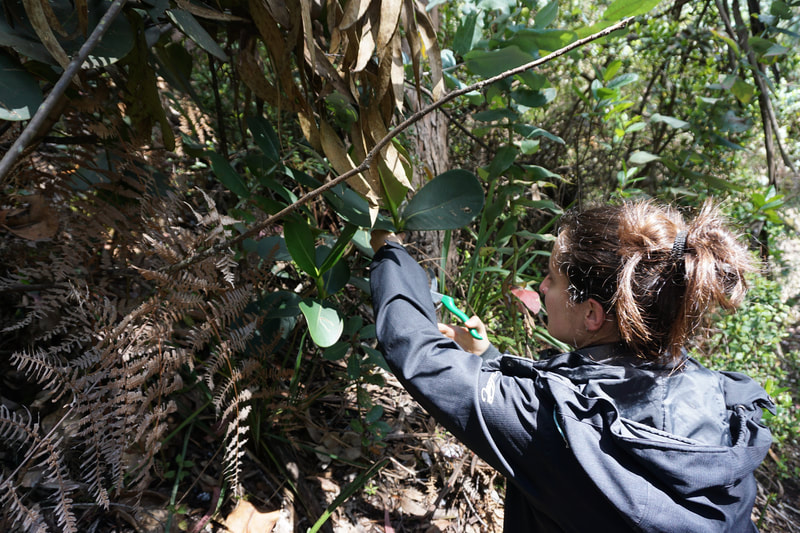 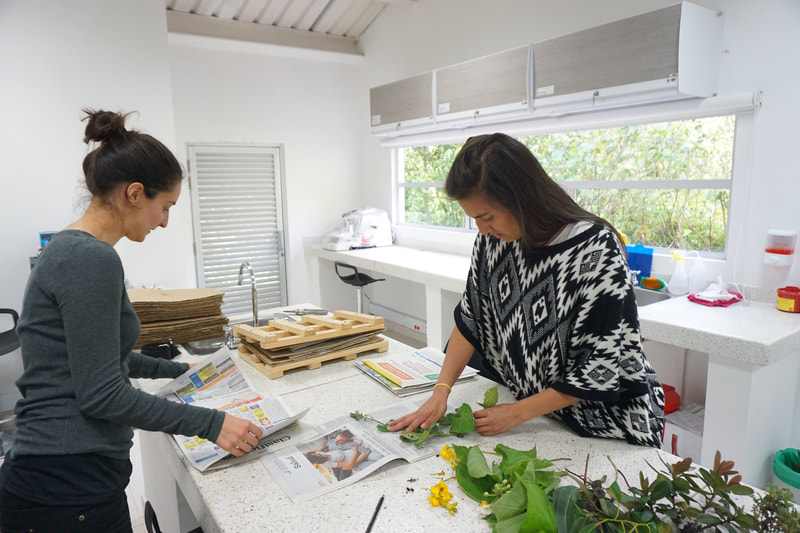 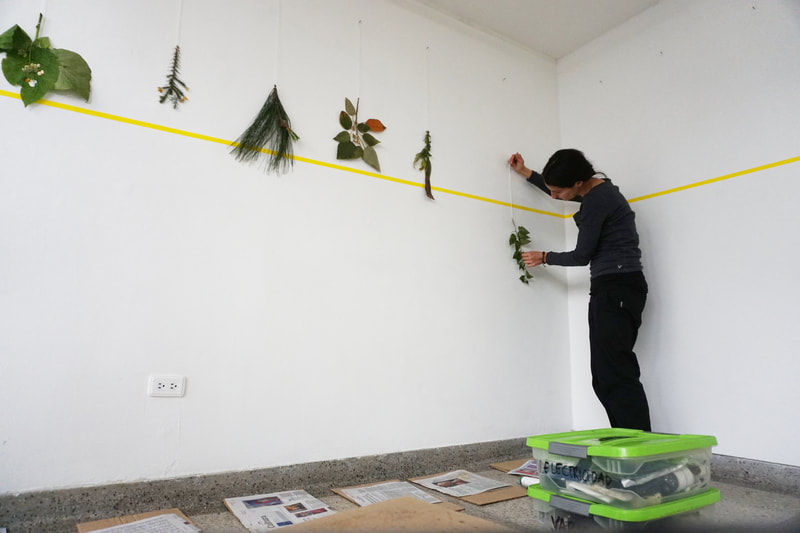 
Selection of plants : One of the processes was the selection of 40 plants and trees from different parts of Colombia, mostly different kinds of forests. The selection took place according to various criteria but the most important was to select a number of plants and trees that together generate a diverse ecosystem (symbolically) from their attributes: their characteristics that describe the plants, their behaviour, their known traditional uses, their relational aspects to other plants and trees, etc. The information comes from various sources generating a dialogue of different kinds of knowledge which was written in collaboration with Klaudia Cárdenas, Germán  Torres and Alejandro Hernández (members of Instituto Humboldt). Each description of the selected species was collected from research based on different conversations, encounters, readings, etc. When the process of selection took place we began the process of collection which happened at the Venado del Oro office from Instituto Humboldt, a diverse forest locally reintroduced that is appropriate to the altitude and climate of this area.

This process became a botanical expedition which was accompanied by Sandra Medina and Ana Maria Garrido, who are specialists at Instituto Humboldt. The procedure followed standard parameters of collection, however points of discussion arose due to different visions and intentions involved in the process such as how important it is to collect fruit, seeds and leaves all at once in order to keep and study that plant from a scientific point of view. This was not the intention of this collection, and this space in between generated interesting conversations that none of us who were involved thought about before.
In addition, the selection of plants and trees went through a process of pressing. This process followed the standard scientific method, however there was a decision taken in regards of how to conserve them. The choice was to press but not to dry in the oven, which is the conventional form for conservation. This process changes the colour and makes them seem “less alive”.

Soundscape: another important element of this event was the soundscape generated with the purpose of guiding the collective experience. It was chosen with the aim to generate a time based experience where the awareness of “being together” was present, while giving importance to the conceptual approach and guiding feelings for the experience. This narrative therefore tackles important concepts encountered during the residency such as: forest, resilience, the relational, the interdisciplinary, the sense of belonging, notions of place, exchange, the hidden, native, natural, time, dialogue of the different forms of knowledge, among others. The soundscape is composed with various sounds coming from different sources, from local recordings, to sounds from the Humboldt sound archive to composed sounds which I generated as well as the voice over. This personal approach to the concepts led me to choose my voice to represent this text. This narrated text is an invitation to bring each participant from the here-now to become another form within the created ecosystem. Each participant therefore was encouraged to become a plant based species, in particular one of the 40 species presented at the space.

Space: El Parche Artist Residency was the space chosen for this event. There were a number of interesting points to highlight. First of all, this space is literally a space in between as it is between the second and the third floor in a place where you need to ring the bell in order to get access. This might sound anecdotic but was an important aspect of this decision. El Parche Artist Residency is an independent art space where international experimental research based art is presented. Since I explained the conceptual approach to the organisers they were very keen on naming me as “artist in residence at El Parche” for two weeks. The space was very important for Disonancia Sugerida as it determined the materialisation of the ideas, not only because of the area, light conditions and possibilities/limitations of the space, but also the acoustics. In the process of preparing the exhibition a number of encounters took place, such as how plants after being flattened for a few days became 3D again. Some encounters were more energetic than others in giving corpulence to the plant again. The organisation of plants on the wall was based purely on aesthetics and how the plants had a dialogue with the space and the yellow line.

Participants were carefully chosen. 40 participants could take part in this activity as there were 40 plants on the space. The chosen participants came from different fields of study; half of them were academics, practitioners and community members from natural and social sciences and the other half were artists and people from other disciplines such as permaculture practitioners and activists. This wide scope of knowledge was important to make dissonance together, colliding our interests on a dialogue between different kinds of knowledge and allowing common thoughts that go beyond disciplinary approaches.  In the following paragraphs I will describe the process of conceptualisation, intentions and logistics of Suggested Dissonance: