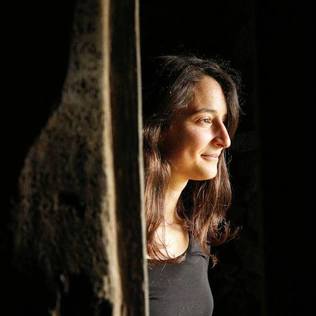 Seila Fernández Arconada is a multidisciplinary artist and researcher. Her process-based practice explores artistic methods, its boundaries and social approaches focusing on socio-environmental contemporary concerns. She is Honorary Research Staff in the Department of Geographical Sciences of the University of Bristol (UK) and research collaborator at 'Art, Research and Feminism' at the University of the Basque Country (Spain)
​
Seila has exhibited internationally as well as leading numerous multidisciplinary workshops and interventions, including Migration, Identity and Belonging (Institut Français, Maurice), Natural Camp (Role Models Ukraine), Wonder, Wander (Jordan), On Earth (UK), AGU (USA), Communities Development in Post-Crisis Regions (Ukraine), Governing for Resilience in Vulnerable Places (Netherlands) and Transnational Dialogues (China).


Participatory and collaborative research methodologies with professionals from other disciplines and community members are vital in her practice. She has co-directed Land of the Summer People, a collaborative project with the Department of Water Engineering of the University of Bristol (UK), Some:When, celebrating cohesion through the watery heritage of the Somerset Levels and Moors, a collaborative-socially engaged project co-directed with the artist Sage Brice and locals in Somerset (UK) and Afluents within the international partnership Collaborative Arts Partnership Program in ACVic (Spain) among others.

Her artistic research is also presented in words such as, "Riding the Tide, socially engaged art and resilience in an uncertain future", a collaborative paper recently selected for publication (Netherlands). Seila also co-directs the collective Functional Collaborative Futures.

Recently, she has been collaborating with the project “Colombia BioResilience: Biodiversity resilience and ecosystem services in post-conflict socio-ecological systems in Colombia”, in collaboration with the University of Bristol, Exeter and the Alexander von Humboldt Biological Resources Research Institute ( Colombia). Currently she is directing the project “Cuando el río suena, agua lleva” granted by the International Grant for Artistic Creation of Botín Foundation. This project will be developed in the course of the Amazon River between Peru, Colombia and Brazil.